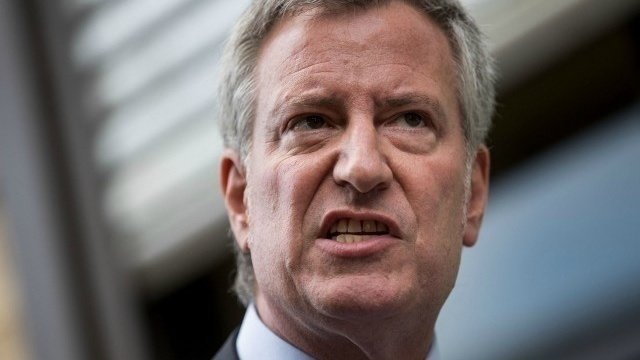 Mayor Bill DeBlasio is destroying New York City. We cannot have him continue as mayor for the next two years. The people of NY want change, and now is the time to act before it becomes any worse. This is not about being conservative, left, etc. This is about “radical” politics that are harming the city and being neglectful of New Yorkers. Below are some of the issues with Mayor Deblasio:

1) Bill does not care what New Yorkers think, want, or need. “The issue is people don’t like him, and he doesn’t care,” said Rebecca Katz, a former longtime de Blasio adviser and founder of consulting firm New Deal Strategies.

2) The mayor plans to run for President in 2020. He has been absent and neglectful of NY, especially in times of need. (Ex: summer blackout of 2019) How can Bill abandon NY anymore than he already has to go on a campaign tour, especially when he has no chance of winning?!

3) The mayor has made more horrendous choices than past infamous Mayors like Lindsay and Dinkins.

4) The mayor avoided acknowledgment of the  Puerto Rican Day Parade and veterans’ D-Day ceremonies. He also “forgot” to attend a 9/11 memorial event for victims.

5) The mayor is anti-police. However, he has no issue with gathering a squad of officers to guard him as he works out at a gym in Park Slope, Brooklyn. Yeah, that’s what he’s doing instead of being a mayor. Summer 2019 has proved that people feel protected when they want to assault and mistreat the NYPD. He has allowed criminals to gain ridiculous protection. https://www.google.com/amp/s/www.nydailynews.com/news/politics/ny-de-blasio-rudy-giuliani-hooligans-nypd-water-20190723-2ehxmsay2ngsnjxudth5gedrui-story.html%3foutputType=amp

6) Crime is low? HA! It might appear that way because police cannot do their job. He ended Stop and Frisk. Officers do not receive any support when it comes to arrests and investigations. Their lives are in danger even more so now that they do not have the city’s support. He has passed laws for so-called minor offenses to be ignored. (Like urinating in the street). Critics charge that the shift will undermine the “broken windows” theory of policing that began in the city in the 1990s. Ignoring these so-called minor crimes have and will continue to lead to bigger offenses.

7) DOE. The mayor does not support schools and teachers. Instead he has appointed a chancellor who is a racist and failed superintendent of Texas schools. Together, they are implementing one of the worse discipline codes to protect unruly students. Like crime, it’s a way to limit consequences so they can say, “Hey, look at how bad behavior has decreased in schools!” Educators are limited in what they can do with poor behavior. His appointment of Chancellor Carranza is to support his diversity narrative so he can say “Look what I’ve done! Vote for me in 2020!”

8) The MTA continues to increase their rates, but the the conditions of trains and stations are unsanitary, unsafe, and unstable.

9) The mayor is a socialist. Mr. de Blasio announced a plan to spend $100 million to ensure that undocumented immigrants and others who cannot qualify for insurance can receive medical treatment. Interesting. Tell the hardworking US citizen mother who struggles to provide for her child that one! Tell the increase of homeless people that you will support “illegal immigrants” over their needs this one. Is that why he refuses to work with the federal government when it comes to immigration issues? Again, he only supports people who will fit his broken diversity narrative.

10) Increase in parking meter rates. The new system consists of six tiers of hourly parking prices, ranging from $1.25 in some neighborhood shopping districts to $7.50

11) Park Slope residences and workers are experiencing an extreme difficulty parking, and this issue will continue to spread across the city. He is eliminating parking spots for bikers and car shares.

12) Increase in property taxes. For decades, tax laws have prevented assessments from rising more than 6% a year, even though property values in certain areas—such as de Blasio's home neighborhood of Park Slope—have increased far more. Advocates argue this has forced a disproportionate burden on rental buildings, commercial properties and houses in outer-ring neighborhoods which are more likely to belong to minority homeowners. He believes that we cannot reduce taxes because that will take away from the city’s services. What?! Everything has become run down, and New Yorkers are fleeing from neighborhoods they have grown up in for years because they cannot afford it. Instead many illegals are buying single or two family homes, and allowing anywhere from 3 to 5 families to reside to support their taxes and mortgages. Obviously, most Americans refuse to live this way. Rent is at an all time high because landlords have ridiculous taxes to pay.

13) The mayor’s wife, Chirlane McCray, “lost” over $1.8 billion taxpayers money. Some say it was “wasted” on organizations or laws that never proved to be anything other than their name slapped on it.

These are just SOME of the issues with the mayor. Sign this petition to say Impeach Mayor de Blasio! We want our New York back to being safer, supported, and loved!

Start a petition of your own

This petition starter stood up and took action. Will you do the same?